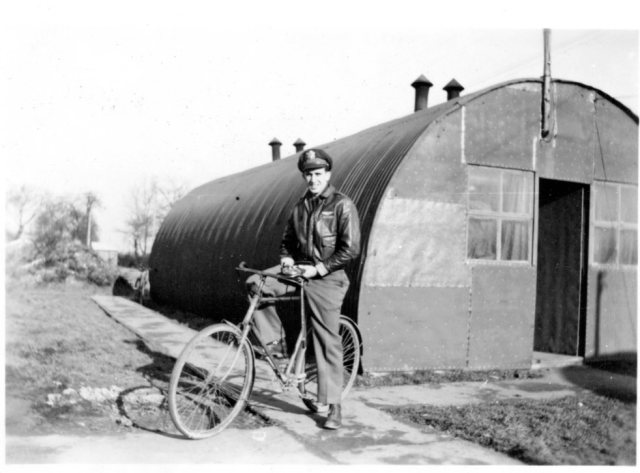 Kenneth E. Cline outside his living quarters at Wendling.

In England, Kenneth E. Cline wrote to his wife:

Tomorrow they expect the weather to be inclement again.1 I was planning on going down to see Verne — called him up today but couldn’t reach him.

1 On Easter, the 392nd Bombardment Group planned on having a picnic at Castle Acre, the ruins of a historical priory within walking distance of Station 118, Wendling. The weather failed to cooperate, and the picnic turned out to be a wiener roast using fireplace in the Group’s library. It took over three hours to roast all the wieners.

Celebrating the Past, Present and Future of Navy Cryptology

A random flight through some of my extraordinary flying adventures

Frugal Wartime Recipes to See You Through Challenging Times!

History Understood In Its Present

Your destination for rare, exotic, and prototype firearms

Ripping yarns from the Age of Adventure

A Blast From The Past

Moving with the tides of history

Proclaim liberty throughout the land

Archives and Collections @ the Library of Birmingham

The whole of human life is here!