We took off for the return to combat at Stirling Island. Weren’t here an hour before the blow fell. Our crew is again split into four other crews. Guess we can’t win. Disgusted is the word for Wynne. 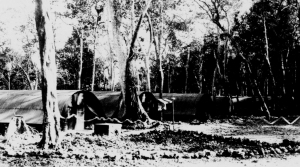 Read the Saturday Evening Post1 tonight, read my Bible lesson2 and went to bed early to the tune of rain on the roof of our tin roofed Quonset hut.3

Prayers came easily tonight and I asked that disgust be warded off, as it has always been a cancer or a blight to me. After disgust takes over, don’t give a damn for anything. Thus far, haven’t been hurt. Someday, maybe.

2 Wayne occasionally mentions a “Bible lesson”. Did the military chaplains provide the troops with Bible lessons to help them through the war?

3 The 42nd Bombardment Group combat crews’ quarters were located among jungle trees on the southwest end of Stirling Island.

On 28 June 1944, Bonnie’s 23-year-old brother, Ernest M. Gibbons, was inducted into the US Army at Fort Bragg, North Carolina. He will serve as a Private with the 41st Armored Infantry Regiment of the 2nd Armored Division. During the Battle of the Bulge, 2nd Armored Division, nicknamed “Hell On Wheels”, fought in eastern Belgium, blunting the German Fifth Panzer Army’s penetration of American lines. The 2nd Armored Division, part of Patton’s Third Army, helped reduce the Bulge in January, fighting in the Ardennes forest in deep snow and freezing winter conditions.

Three of Wayne’s brothers are in the war, two in the US Army Air Force and one in the US Army. Bonnie’s brother has just enlisted in the US Army and her sister’s husband is in the infantry in Italy. Today, it is difficult to imagine a world in which everyday many of your family members were at risk of being wounded or killed.

. . where the worlds of film noir and pre-code collide . .

The annex to John Grant's *A Comprehensive Encyclopedia of Film Noir*

Preserving the Past II

50 years of research about aviation by Clarence Simonsen

The latest news on WordPress.com and the WordPress community.

Stories About Urbanism, Adaptation, and Resilience

Sharing our experiences about travel to inspire you!

hiˈstorianess n. rare a female historian. "She is a great historianess, a most charming delightful woman."

The story of aircraft over water

Ordinary people make history and in the process do extraordinary things.

ModelArt
The paths that lead to us.

Exploring the routes of our roots.