June 21st to June 27th were days spent in the Russell Islands. They’ve been beautiful this trip. Only one day of rain has marred its scenic beauty and cool days have been the vogue. 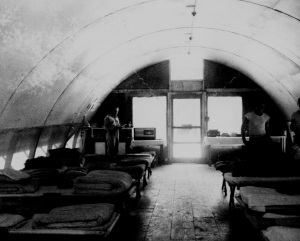 Most of the rats have been killed off but I still slept under my mosquito net. Have a horror of them running over me, and chewing on me as I sleep. They have a nasty habit of crawling under the Quonset huts1 to die. The stench is awful, and we, of course, find it necessary to drag them out for burial. Ugh!

Have been on the beer unloading detail. Seem to catch it every time. Have been issued three bottles of cold beer every other evening. This is a rare treat when served cold. We even had fried chicken and ice cream again, which is really something.

Our transfer looms nearer and nearer. It sounds too good, even though it chiefly entails strafing and cannon firing from the B-25H.2 The thing that appeals to me is the fact that our crew will always be together again.

The 27th we flew to Guadalcanal, carrying a Brigadier General. Nice fellow. Instead of jumping in the truck and beating it as most of them do, he waited and gave us a lift to operations.3 We picked up our new “H” and flew it back to the Russells where its bomb bay tank4 was removed.5

Tonight ends our rest and we’re all sorry to go. It’s been a peaceful ten days and conducive to good nerves. Bonnie, thoughts of you run in and out of my mind and my heart is filled with love of you. Good night darling, Sweet dreams.

The photograph above is of the interior of the 42nd Bombardment Group’s sick ward on Stirling Island. It is typical, however, of enlisted men’s barracks. Note the screened opening at the end of the Quonset hut as well as how the lower section of the Quonset has been opened to provide for cross ventilation. Along the ceiling’s ridge are bare light bulbs. There is no privacy here.

3 Wayne did not identify this gentlemen whose I kind act I would like to memorialize. Does anyone know who this might be, a Brigadier General who was in the Russell Islands on June 27, 1944?

5 The removal of the bomb bay fuel tank was a relatively quick and simple process through the following steps:

Prior to the removal of the fixed bomb bay tank, make sure that all the fuel has been drained. Open bomb bay doors a instructed in Section 4, Paragraph 16, and disconnect actuating rods from the doors to facilitate removal of tank.

1.Disconnect transfer pump electrical connection from jack on right-hand side of bomb bay. Remove drain line from the transfer pump.

3. Disconnect hose from vent fitting on top front of tank by reaching through door in crawl deck above the bomb bay.

4. With four men holding the tank to support it, one man can remove the 6 bolts attaching the tank assembly to the bomb bay.

5. Lower tank assembly to the ground.

"The one exclusive sign of thorough knowledge is the power of teaching." Aristotle

thoughts about politics and the passing scene

Politics, charts, and cats from the newly blue enclave of Orange County, California

Epic trip from Saint Petersburg to China via Siberia and Mongolia

Unraveling the past of the Americas, while preserving that past for the future.

An Archive of the Lost Generation and the 1920s

42
The persistence of folly, removing all doubt

Notes from a book reader in the Philippines

What I Eat, Daily.