Golly. The time goes so quickly it’s extremely difficult to keep pace with it. Haven’t done much of note lately except to answer letters of Bonnie’s and Mom’s cards. I wrote to grandma, Shorty and Bob. All these letters today. For some time, my spirit has been too low to write much, but my condition has improved since that time.

Good things mainly have happened. We got a new commanding officer, Captain Wolfendale. His first official act was to rescind a mess schedule which provided that Privates to Sgts, 2nd Lts and First could eat breakfast 5:30 to 6:00. Staffs to masters, captains up 6:00 to 6:30. Ha! Ha! Such respect for rank.

Incidentally something new has been added for the Birmingham clique, all master sergeants. They now have a private table, waited upon by a corporal (Dog Robber). We call it the “domicile of the fourth leftenants”! Many a chuckle this has afforded us. Hope the new C.O. will do something about this situation; but hope not too. They’re getting the proper ridicule now, it seems. The whole group is laughing. Wonder how long they can take it or is ignorance true bliss. 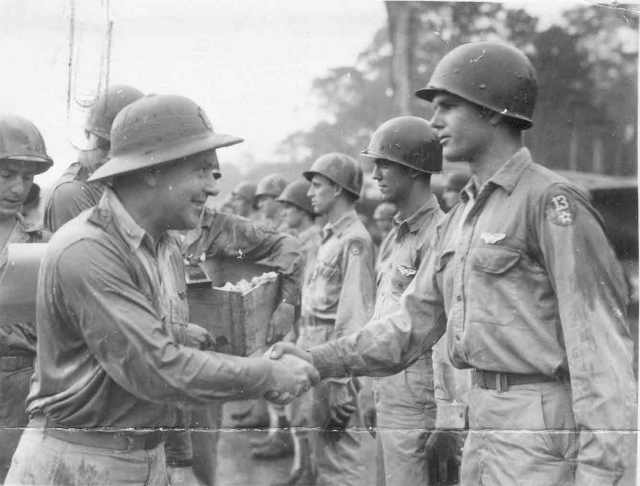 General Barnes1 finally awarded a group of us the Air Medal.2 We stood in a driving rain while these were awarded, but the general was right with us which made it o.k. by us. We were placed in two platoons, given open ranks steady, front! Order “Present arms” (hand salute) while the bugler played “To the Colors”, order arms; and the citations were read. The general then approached each man in the line who saluted. One medal was then given and each man’s hand shaken by the General. After this, the general made a short speech, thanking us for doing so well in the Solomons and New Guinea campaigns. Promised also that we’d play a leading role in the Philippine area. Excitement ahead, I suppose. This description sounds cut and dried, but it isn’t. We were lined up before a line of B-25s. In the distance one was being run up. A Black Widow and P-47 buzzed the presentation at a moderate altitude out of deference to the general’s rank.

A big naval battle has been going on around Formosa between Admiral Halsey and the Japs. In support of the action, B-29 Super Fortresses have bombed the island for three consecutive days. Looks like something is in the wind. Japs claim the sinking of our entire fleet. We are admitting to the loss of 45 planes and damage to two light naval vessels.3

Need to read the Bible and so to bed. Guns need to be cleaned tomorrow which make for a hot day. I love that sweetheart of mine.

1 Brigadier General Earl Walter Barnes was the commanding general of the 13th Fighter Command, a component of the 13th Air Force. His personal transport was a P-61A, 42-5531, Black Widow night fighter.

3 Massive air attacks were underway north of New Guinea in preparation for the invasion of the Philippines. The following provide several perspectives on these attacks:

No Damage to Carriers or Battleships

Washington, October 17.—A Pacific fleet communique says that during the fighting since October 10, between our carrier task forces and enemy air forces-shore-based on the Ryukyus, Formosa and Luzon, our battleships and carriers suffered no damage.

Two medium ships, presumably cruisers or destroyers, suffered damage and are retiring from the area.

During the past week’s attacks on these three areas, 843 Japanese planes were destroyed and 37 probably destroyed.

The United Press representative aboard a U.S. carrier off Formosa, says that over 100 Japanese planes were shot down today in the greatest air battle since the Philippines sea engagement. For nearly 10 hours, the giant task force beat off wave after wave of attacking torpedo planes and fighters as it retired after three days’ attacks on Formosa.

The Japanese fleet was cited approaching the area in which the U.S. Pacific fleet forces have been operating in the Western Philippines sea, but, discovering our fighting strength unimpaired, they avoided action and withdrew to their base.

The American forces have averaged 10 ships and 10 planes daily, Admiral Nimitz declared in a broadcast to the “Herald Tribune” forum.

He added the results would have been much greater except for the scarcity of profitable targets.

The enemy air opposition was comparatively late in the early stages of the attack but grew more intense over the Formosa and Manila areas.

Admiral Nimitz pointed out that, in recent days Americans had heard good news about the fleet striking close to the heart of Japan, but it would be a grievous error to think that such success gives rise to hope for an early and of the war against Japan.

Super-Fortresses raided targets in Formosa today for the third time in three days.

A 20th Air Force communiqué said that today a large force of Super Fortresses from China bases returned to Formosa for the second time in 48 hours and attacked military targets at Okayama and Heito. The weather was good and very good bombing results were observed.

At Okayama, they attacked the same targets as on Saturday. Heito is an important Japanese airfield and air supply depot.

At Okayama, 37 buildings were totally destroyed and 16 others heavily damaged, constituting approximately two thirds of the target.

Regarding the four super-Fortresses previously reported missing, two are our safe, and 10 of the crew of 11 of the third bailed out at a forward base. Thus, only one Super-Fortress was lost on the two missions in 48 hours, despite the heaviest bomb loads.

General Arnold, in a statement on the Super-Fortress raids in Formosa, said that there was almost complete lack of enemy air opposition to both attacks. Reconnaissance photographs showed that all the airstrips in the target area are inoperable, due to bomb damage. At least 50 aircraft were destroyed or damaged on the ground.

General Arnold added that since the Super-Fortress’ targets were distant from airfields, it is presumed that most of this damage was inflicted earlier by carrier attacks, and the same naval operations were responsible for the lack of enemies opposition to the Super-Fortresses, giving them freedom to accomplish missions not otherwise possible.

Within Japan, a different version of these events was being reported:

Meanwhile, the Japanese people are wildly celebrating the Formosa sea victory which made Hawaii and Malaya appear sideshows, and which can be compared to the Russian fleet’s defeat in 1905.

General Koiso, in a message to the nation, said the enemy offensive against the Philippines has been dealt a sledgehammer blow. “The long-awaited opportunity for Japan’s Pacific battle has arrived. Our army torpedo planes and navy air force showed their mettle in the present action.”

The Tokyo broadcaster declared: “The distinctive war results achieved by our army and navy in annihilating the enemy 38th Task Force in waters eastward of Formosa, marked a shift in our position from the defensive to the offensive.”

Another broadcast said Admiral Nimitz’s fleet, which had the task of combining with General MacArthur’s troops to land troops in the Philippines, is now crippled. The Tokyo radio claimed the Japanese naval back victory setback the impending invasion of the Philippines at least two months.

The American press says a Tokyo broadcast heard by the F.C.C. complained tonight that the British and American newsgathering organizations were ignoring the Japanese claims of a great victory in the Formosa area.

The American Press, United Press, and Reuters have assumed the attitude that nothing happened. The only thing they released was Admiral Nimitz’ communiqué of October 15, saying the air forces were engaged in battle. They did not mention the Japanese Imperial headquarters announcement, although it is the role to make thorough Press comments on Imperial Headquarters communiqué whether or not it is favorable to them.

On the ground in the Philippines, there was a more personal view of what was happening. On October 17, 1944 Felipe Buencamino III noticed only Japanese planes were flying that day, and recorded that,

“Several people were getting disappointed. They are asking: Maybe there is some truth in the Japanese claims of 12 aircraft carriers sunk? Is that why they can’t bomb anymore? Others are angry. They say: “The Americans shouldn’t have bombed at all if they were going to stop like this. It only gave the Japs a chance to spread their dumps into private houses. They should have kept it up, bombed on and on”. Only consoling note is the fact that Formosa is being bombed and rebombed. People say that this is a prelude to the invasion of the Philippines. “They’re neutralizing whatever help Formosa can give to the Japanese here when invasion comes” according to Joe.

“I don’t know what history books will write about this day. Maybe they’ll put it down as the beginning of the offensive for the reconquest of the Philippines. Or probably they’ll note it as just the 7th day of the naval attack on Taiwan with diversionary raids on the Philippines. To me it’s the day I had a narrow escape. A machine gun bullet struck our shelter, fortunately on the concrete side. If it had hit an inch higher, it would have penetrated the thin wooden panel and I wouldn’t be writing this now.

I don’t know how many U.S. planes raided Manila today. They looked plenty and I didn’t have time to count because AA shrapnel started raining around our garden. By the drone and by the glimpse I had, I judged there were at least a hundred.

October 18 to this tramp means nothing but several hours in the air-raid shelter, Mama nervous about Vic who refused to take cover, Neneng praying the rosary, Grandpop smoking a cigar, Dad going in and out of the shelter to take a look and then to hurriedly run in when the earth begins to shake, and the dog trying to squeeze into the shelter.