Monday Went on my 18th mission today. Rain delayed us for two hours and we took off in the face of weather.1 When we hit the weather wall, 12 ships went all over the sky and one spun in, we think, and we’re still searching for the men.2 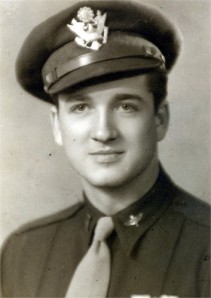 A swell bunch of boys. Pilot is Myers, copilot Grantham, bombardier Braswell, engineer Hanson, radio operator Campo, John; gunner Sullivan. These boys are all grand fellows, and I don’t feel they’re gone. We are sure to find them tomorrow, God willing. Tall, curly headed (black) Sullivan, short John Campo, a peach of a fellow who has a good line on life, and tall, slender blonde Hanson, handsome, never says much. Cool fellow and with the most musical laugh, I’ve ever heard. Please God, bring them safely home. All good men. This mission is one I don’t want to remember.3 Amen. Thanks Father for bringing us safely home. Received a package of cookies, candy and nuts from Bonnie today. Also a letter from her and one from mom. It’s good to get good things from home. Thank you, darling. Notes & Commentary 1 Twelve B-25s of the 75th Bombardment Squadron took off from Stirling Island on May 5 on a mission to bomb a truck area at Rabaul. The mission plan was for the B-25s to be over the target by 1110L; however, the mission’s aircraft did not begin to launch from Stirling Island until 1112L, two hours late. The mission’s flight route was to take them from Stirling to East Cape, thence north of Duke of York and Waton Island and then to Rabaul. As with other strikes against Rabaul, the mission would retire down St. George Channel then north of Buka Island and then down the east coast of Bougainville, east of the Shortlands Islands and to Stirling. Enroute to Rabaul, the mission encountered a large weather front just south of Motupena Point. The front extended westward about 200 miles with a base at 500 ft. and top of 20,000 ft. The heavy weather encountered at Motupena Point caused the formation to scatter. Over Rabaul, the weather was clear with generally the same conditions at Stirling Island. At Rabaul, heavy and medium caliber, tracking antiaircraft fire was encountered. The antiaircraft fire was accurate as to altitude and received before, during and after the bombing run. Among the antiaircraft guns observed firing was one gun near the radio station, two guns inshore from the wrecked flying boat in north Simpson Harbor, three guns in the cricket field on the east side of Simpson Harbor and the Hospital Ridge guns. Ten of the mission aircraft dropped their bombs over the target at 1321L. As a result of the bombing, one fire giving off black smoke rising to about 500 ft. was observed. Eleven of the mission’s aircraft recovered at Stirling between 1526 and 1700L with two aircraft having first landed at Green Island to refuel. One aircraft failed to return. B-25 #42-64705 was last seen five miles off Motupena Popint at 1200L as it was entering the weather front. Its crew consisted of the following men:

Statement of Air Accident On June 5,1944 I was leader of the fourth element enroute to the target, with Lt. Howard D. Myers (O-672174) on my left wing. We took off from Stirly at 1113, joined the formation, and preceded on our climb for altitude. At approximately 1125 I noticed the formation was headed for an opening between two large cumulonimbus clouds. I was about one hundred (100) feet below and one hundred fifty (150) feet behind the third element and climbing at an indicated airspeed of one hundred fifty (150) miles per hour. The squadron leader tried to radio to the flight to turn around as he saw we would not be able to clear the top of the clouds. However, his radio was not operating correctly and no one in the flight heard his warning. When I realized I could not lead my flight through the clouds, I looked to my right and left and saw that Lt. Bever was fairly close to my right wing, and that Lt. Myers was at least one hundred fifty (150) yards to the rear. I motioned for a left hand turn and made a thirty (30) degree bank to the left, which would have given Lt. Myers ample room to follow me. My turn placed me in the outer edge of the cloud and I was on instruments for approximately one and a half minutes before breaking out on the same side we had entered. While in my turn and about ninety (90) degrees to Lt. Myer’s flight course, I noticed that he was below me and continuing straight ahead. That was the last time I saw Lt. Myers. This was about 1135L. After breaking out I climbed about five hundred (500) feet and again attempted to go through the top of the clouds. Immediately upon entering the cloud I was caught in an up-draft, and although I had the stick full forward, I was climbing six thousand (6,000) feet a minute at one hundred forty (140) miles an hour, with the ship vibrating all over. I called the bombardier to salvo all the bombs, but he was in the tunnel unable to move due to the violent maneuvers of the airplane. I was next caught in a donwn-draft which sent me down in a tight spiral, six thousand (6,000) feet a minute at two hundred (200) to two hundred fifty (250) miles an hour. My altitude when entering the cloud was around six thousand (6,000) feet, and varied from eight thousand (8,000) to four thousand (4,000) before we were thrown out of the cloud, the airplane being on its side. It is my belief the Lt. Myers was caught in a violent draft and sent into a tight spiral or spin from which he never recovered. The base of the clouds was four to five hundred feet. Claude B. Simmons 1 Lt., Air Corps.

The Personal is Historical

Everything about Productivity Tips, life and Future.

The best in WWII aviation history

Celebrating the Past, Present and Future of Navy Cryptology

Frugal Wartime Recipes to See You Through Challenging Times!

History Understood In Its Present

Your destination for rare, exotic, and prototype firearms

Ripping yarns from the Age of Adventure

A Blast From The Past

Moving with the tides of history