We had one period of Renshaw this morning. Were given the Jap planes, Tony and Betty. Tony1 is the Jap’s only “in line” fighter. It looks a bit like a P-40, slight radiator instead of full. Small air scoop midway lower fuselage. Rudder extends beyond tail cleft. Rudder on a P-40 more rounded on trailing edge. Betty,2 the medium bomber, looks a little like a B-26. Tail rudder is huge and light, almost pointed. Long nose. Engines set close together. Wing is set low on fuselage whereas B-26 wing is set high. A 20 millimeter gun in tail, covers 180 degrees. Two 7.7’s in nose compartment. The speed 285 mph, Not bad at all. Comparable to our B-25. Armament about even as our plane is loaded down with .50 calibers.3

The camp is in an uproar. This morning, rumors from Chungking4 say the Jap people are circulating posters for the elimination of Jap premier Tojo. He’s the guy who always wanted to take on the United States.

No fighter activity over Rabaul for the past three days. Hooray! There is still plenty of flak however. 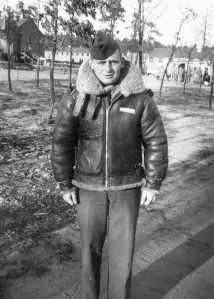 Seehorn and Russell are playing Pitch.5 Seehorn says he is going to have his girl come down over for the weekend.

Can’t see how any of the forced down American airmen will starve in this area. These islands are lousy with different types of food. Everything from bananas to pineapples.

Major General Twining relinquished command of the 13th AAF. recently. Takes a mighty good record with him. Evidently our new C.O. is General Harmon.6 Maybe that’s why the matchstick and paper complex of local officers. Policing Guadalcanal, mosquito ridden, heat ridden, bug owned, and underbelly of hell! Ha! It’s a good idea at that but incongruouss as hell.

Russell is busy chasing flies which are drinking his beer. Damn flies are committing the unpardonable sin.

We ought to begin flying about Monday a.m. Should be at Stirling7 or the Russells8 by next Saturday. Sure. Hope! I Hope! This laying around is hellishly monotonous.

P-38s and P-40s had a lot of fun pin wheeling all over the sky this morning. Most of the boys would give their left something or other to fly them. I can’t say as I blame them.

There are still no letters from home. This mail service had better get on the ball and I don’t mean perhaps.

Well’ it’s time to read a few more pages from the Bible. 10:55 am. One hour and five minutes reading time finds me deep in Numbers.

Dinner is over. Ah Yes! Did I tell you, we had fresh eggs this morning? My stomach is very happy. I received some orange juice at the PX this noon. No wonder the army messes in the states didn’t have juice. Hell, it’s all here at Guadalcanal!

Ah! Yes! Wrote a very short story today entitled, “Poor Ratsumo” this to be attached to this diary.9 No doubt the story has been true many times in this war! You shall be the judge of that!

Well, wonders never cease? The word is now is that there are many brand new Hs at Sterling awaiting B-25H trained personnel. It seems the boys who fly the Cs and Ds do not like them. Put a ring through our noses and lead us to them, brother! We love ’em. We’ll go in at low level and fire that 75 anytime, anyplace. That’s our meat and we were weaned on a strafing, cannon firing, and hell of a good ship.

Heavens, what an awful show last night, no plot, no decent acting, no sense, no nothing.

Leopard Man is supposed to entertain us tonight. It had better be good. Two in a row like the one last night, begins another battle on Guadalcanal. Ha!

There are only 14 billion dead dratted flies around “cheer” today. Wish they were all dead, a sacrifice to something or other.

Next to Renshaw class and also to Jam Handy trainer11 this afternoon. Two more boring classes, but both will come in damn handy in an enemy filled sky. I take all I can get even though it is not likeable to me.

Three Guadalcanal mosquitoes made a mistake and landed on Koli Field yesterday. The ground crew jumped on them and filled all three with 100 octane gas before discovering their mistake. Of course officer wanted to know the cause of the shortage of gasoline, a little while later. All the ground crew could do was stand there and gulp. Probably didn’t think the ground officer would believe their story! Screwy effect this place has on a person, eh?

Suppertime! The Leopard Man12 wasn’t a bad show, but the boys were looking around this jungle and were very free with the displaying of their flashlights. The thought of a black leopard on the loose in the night is, to say the least, blood curdling.

Read the 23 Psalms13 before retiring tonight as well as saying my prayers. Goodnight.

4 During World War II, Chungking (now Chongqing) was the headquarters of Generalissimo Chiang Kai-shek’s government and Allied forces in China. It was heavily bombed by the Japanese.

6 Nathan F. Twining (1897-1982), a fighter pilot, commanded the Thirteenth Air Force from January 1943 until January 1944 when command was passed to Hubert R. Harmon (1892-1957). Harmon was the first superintendent of the U.S. Air Force Academy. See: http://en.wikipedia.org/wiki/Nathan_Farragut_Twining and http://en.wikipedia.org/wiki/Hubert_R._Harmon.

7 Stirling Island is located among the Treasury Islands. See: http://en.wikipedia.org/wiki/Stirling_Island.

10 During low-level formation flying on Saturday, February 12, 1944 at Greenville Army Air Base, the wings of three B-25s collided and the planes crashed.

Two of the planes burst into flames while still in the air and the wreckage of all three was strewn over a wide area, but with no damage to the base installations, army officers said.

There were no survivors. The planes were part of a formation of 24 bombers arranged in four flights of six each. A board of officers is investigating the cause of the collision.

11 The Jim Handy trainer was a “realistic simulator using two synchronized movie projectors and sound effects of real engine noise and machine gun fire. It was portable and easily set up, and cost just $2,000. One projector ran actual combat film footage of fighter approaches, attacks, and breakaways, while the other projector cast a spotlight in the shape of a ring sight showing the correct point of aim. … The gunner sat behind a mock .30 caliber machine gun with an optic sight. When fired, a dot of light projected on the screen showing the student’s point of aim. If the student fired at his target within the correct range and lead, he was rewarded with the sound of real gunfire; otherwise an annoying bell would ring.” “Aerial Gunner Training,” Bomber Legends, p. 15 (http://dc239.4shared.com/doc/WzGvi4z2/preview.html : accessed 15 January 2010).

12 The Leopard Man was released in 1943 by RKO Radio Pictures. It was filmed at Santa Fe, New Mexico and at RKO Studios in Los Angeles. The story of a black leopard “spreading panic throughout a sleepy New Mexico town, it starred Dennis O’Keefe, Margo, and Jean Brooks. See: http://www.imdb.com/title/tt0036104/?ref_=fn_al_tt_1.

13 The LORD is my shepherd; I shall not want. He maketh me to lie down in green pastures: he leadeth me beside the still waters. He restoreth my soul: he leadeth me in the paths of righteousness for his name’s sake. Yea, though I walk through the valley of the shadow of death, I will fear no evil: for thou art with me; thy rod and thy staff they comfort me. Thou preparest a table before me in the presence of mine enemies: thou anointest my head with oil; my cup runneth over. Surely goodness and mercy shall follow me all the days of my life: and I will dwell in the house of the LORD forever.

Reflections of an inquiring retiree ...

A Veteran's Insight into Collecting, Researching and Preserving Military History Through Artifacts and Militaria

A journey through the hobby, by Trevor Marshall

A blog on the Russian military

Finding ancestors and keeping them close to the heart

Bringing You the Wonder of Yesterday - Today